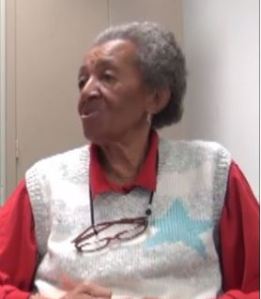 Joyce Byrd grew up in Harford County, where she encountered racial prejudice as a child. She attended Asbury Elementary School and Bel Air Colored High School before going to Morgan State University. After marriage, she moved to Jersey City, New Jersey, where she raised her family and taught English at an integrated high school. During her career, she was also a guidance counselor and vice principal. Her children were spared the majority of experiences with discrimination, simply because they lived in a “northern state” while she grew up in a “southern state.”

Harford Voices is an oral history exhibit developed by History students at Harford Community College. This website exhibits oral histories conducted with various individuals for a History class on the 1960s that took place during the Fall 2012 semester. The class instructor was Dr. James Karmel, Professor of History, Harford Community College. Additional oral histories were added from the Fall 2013 class, and will be updated as more interviews are completed.